Updated! Fisk me? Fisk you! If you’re climbing, you had better be ready to use the Fisk!

New Update: Rope and Rescue did a great job explaining why they like the Petzl ID better than the Fisk! Let the debate continue! http://blog.ropeandrescue.com/11-reason-the-petzl-id-is-better-than-a-fisk/  Tell me what you think and sign up for my newsletter! Which do you like better, the Fisk or Petzl ID. I know many of you understand that they could have different applications, but what do you prefer to use?  The Fisk is not easy like Petzl ID, is it. Could something with no moving parts fail? Have you ever known a Petzl ID to fail? Let me know!

Update: I have to tell you, this is a good subject and I got some great comments. Mentioning that the Fisk is something people got used to is a great point. However, if we know it well, it would be a good idea to stick with it until we learn something new, right? If you know the PETZL ID then maybe you should stick with that until you learn something new. It seems there are more devices out there and maybe we should follow the safety practice at our company. I wonder if NATE or OSHA recommends one in particular, does anyone know?

A Fisk is a simple piece of steel, or stainless steel, that when wrapped properly has 19″ of drag. Why does that matter, well it matters because that is what will give you control of the descent. Controlled descent, which you, the climber, control. Control can be very important when you are 300′ in the air. You would like to control your descent. It is so much safer than an uncontrolled descent! You want to use a Fisk over a Figure 8, if you wonder why then read on.

Update! Hey, I didn’t realize this but apparently the new standard is the Petzl ID. I really appreciate the feedback! I see why the industry is going to it, it looks very easy to use. I know it must be reliable but we will have to hear more feedback. It seems there are mixed feelings about whether it is well liked or not. Most older climbers like the Fisk, but the younger guys seem to think it’s hard to use and too heavy. (Personally I never thought it was too heavy, you climb right, too heavy? I used to pull up 80lb mounts by hand, too heavy!) Thank you all for the comments. This surprised me but times change and I guess the Petzl ID is easier to use. So to be fair I thought I should update this article and add some information about the Petzl ID. While I am not a huge fan of this device yet, there must be a good reason for the change. I am still fan of the Fisk, always will be because it’s a good tool. However, the feedback is that we should be using the Petzl ID, and in Canada it’s required.

“Question
Has the fisk been outlawed?
Answer
No, the fisk HAS NOT been outlawed. Many influential companies have safety plans and policies implementing ANSI standards calling for auto-locking or auto-braking devices which eliminates the fisk as part of their allowed equipment. Many safety associations and organizations have also adopted the “no fisk” type standards but OSHA has not. Until OSHA adopts and starts to enforce the standards that would render the fisk obsolete or “outlawed”, it is still an accepted tool for controlled descent.”

So do you know the difference between a Figure 8 and a FISK. A FISK is what you should be using for controlled descent. A heavy-duty FISK. If you don’t know what this is, then you should not be climbing or descending commercially. You definitely should not attempt a rescue with a Figure 8, but only a FISK. Even if it’s a stainless Figure 8, just don’t do it. Fisk is designed for commercial use. Remember to have your safety rope attached to your safety lanyard, there is an example in one of the videos below.  Properly using a Fisk could mean the difference between life and death, your or someone you are attempting to rescue. This device is critical in controlled descent for the climber. Not a toy, a tool. This is something that you should practice every few months.

Look at this link to see the difference! Don’t buy anything, just a reference for you to look, unless you really want to buy one. However, your boss should be buying these for you!

Don’t be Stupid! When descending, always carry a FISK when on the tower with Rope!

Now that you know what a fisk is, do you know how to use it? If you are certified in safety and rescue then you should know! But, if it has been awhile or if you are learning, then here are some helpful hints. Just remember that it’s all about the drag, 19” of drag to be exact. It is a good idea to practice when you can. Make it a second nature to use it. It is easy to forget! Don’t be stupid, practice!

Here are some official instructions. These are on DBI SALA’s web site. 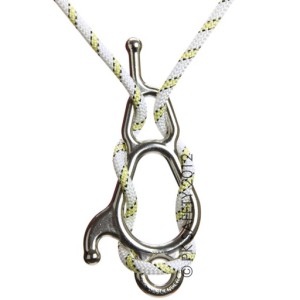