Did you think that small cells should be more than radios? What if they could be the part of FOG computing? 5G asks that IOT has URLL, ultra reliable low latency. How would that work? It’s not that hard.  We need to put an edge server in the small cell. I think this is being researched now, but the reality is that small cells are in a prime position to serve IOT markets.

Small cells are often looked at as 2 things. They can 1) fill the coverage gap or 2) offload the macro site. Now, small cells need to think beyond that, they need to offer more features, and they need to be more versatile.

If the small cell can serve as a FOG node, allowing the IOT devices to have extremely low latency by routing the traffic where it needs to go or responding immediately, then the small cell is more valuable in the system and satisfies a 5G requirement. This is where the small cell should be going. Small cells need to offer more than coverage. They need to be part of the actual 5G solution.

They also need to be creative. When I look at what Sprint and Airspan did with the “Magic Box” and using the LTE UE backhaul for the solution, that is amazing. They were able to make a cost-effective box that made the fronthaul accessible anywhere and used their LTE spectrum for backhaul, and it works.

Carriers were slower to deploy small cells for several reasons, but they all boil down to payback and value. They wanted a cost-effective solution for coverage, but after they got it, it wasn’t enough, and the barriers to deploy were still high, fiber installation and monthly charges did not come down as they had hoped. Site acquisition and rent never got to where they wanted. The OEMs did their part, they provided a cheap unit that works like a cell site, but the other costs were prohibitive. That’s one reason why some carriers would rather deploy CRAN because you have a sector that is control by a macro BBU or cloud controller in the size of a larger small cell. All the features for less money tied into a macro controller. It makes sense. While people see that as a small cell, it

really isn’t. CRAN could be a cloud or concentrated RAN. RAN is Radio Access Network. This is a standard solution that appears to be catching on with all carriers

Make the small cell more valuable. It has to add more than coverage. Don’t get me wrong, coverage still matters, but in today’s world that is not enough! Especially when looking at the payback. If a small cell, especially an outdoor small cell where there are so many barriers, could add more value than coverage then it would be perceived as a high value-add product.

What small cells should have is multiple features. MIMO is a great start. Then a service for FOG computing features to take the loading form the cloud and core and put it at the very edge of the network. Then it should offer multiple wireless backhaul options, like carrier LTE, LTE-U, CBRS, and so on. If Sprint and Airspan could make the 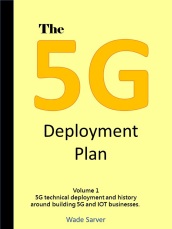 “Magic Box” work, then the OEMs should be able to make a unit that has more features.

Then, look at what the indoor small cells could offer if they were to take this to the next level. I am not saying they need to put a server with each small cell, that is not practical indoors, but they should have the option to tie to a local server for the edge computing so that it is more than a “hot spot” I mean you might as well deploy Wi-Fi if you just want hotspots, here we will have the LTE coverage throughout the building with edge computing to serve customers, devices, and IOT.

Let’s not forget network slicing. Here is where the definition of MEC, Multi-Access Edge Computing. I know, you all thought it was Mobile Edge computing, but now, just to make things more confusing, they added Multi-Access Edge Computing so that you can get more network efficiency. It will allow each service on the network to work in its own realm to make each connection as efficient as possible. If you’re in an office and an alarm goes off, you want to get that alarm right away, not after your coworker is finished watching 10 kitty videos on his new iPhone X, am I right?

My point here is that small cells need to keep moving forward and progressing. This is important to the carriers but also to the private LTE systems. At least if the FCC ever released any CBRS spectrum to us, ordinary folks. We want to build systems today. I mean at this point even T-Mobile has to be a little frustrated because it has to be delaying their densification plans.

Small cells could be a key component in IOT growth. The idea is that the small cell can use all of these features to make IOT simple to roll out and connect to any device. It’s about coverage and low latency. Here is an opportunity for the small cell to make a big difference in IOT deployment. Let’s face it, LTE-M is a great solution for the IOT market. It is something that we could connect quickly and efficiently. Why not design the small cell to work efficiently with the IOT solution that will eventually merge into the 5G solution. Let’s plan for this today!

This is great, but we still need fiber. I think if the small cell can connect to a macro site, then the fiber situation is resolved. The backhaul matters. An upcoming post will be about the backhaul, mid-haul, and fronthaul.I am a huge fan of a hybrid backhaul system which includes wireless and fiber because that is what will make the deployment of the 5G solution most efficient. New 5G spectrum will allow the fixed wireless solutions to be a game changer in this solution. More of that to come.

Putting together your smart city tech solutions, planning, development, and more….TechFecta! Guiding you to a better plan through consulting!