Hey, I thought I would offer more near miss stories because I saw that there was another rescue of some guys working a monopole on August 11th, 2014. They are not climbing but they were in a lift. Go to http://www.khl.com/magazines/access-lift-and-handlers/detail/item99810/Two-injured-in-boom-accident and http://kingston.wickedlocal.com/article/20140815/NEWS/140818333 to see how employees working for Timberline Construction got stuck in a lift. These poor guys were probably happy to be on a lift and it breaks down. They called in for help at 5:11PM local time when the Kingston Fire Department was dispatched. The platform on the lift fell about 30’, they were about 135’ in the air. Hard and fast, then stopped. This was enough to injury the 2 men on the lift, one had facial injuries and the other had ankle injuries. It had to be scary for these guys on the lift. Actually that turned out to be a good thing because they must have been about 130 feet up and that brought them down to 100’ where the fire department’s ladder could reach. Apparently there was a loud bang before the fall.

Don’t hesitate, subscribe and write a review on iTunes or Stitcher today!

Listen to the Podcast Here! On iTunes search for wade4wireless today!

When both Kingston Fire Department and Plymouth Fire Department crews got on site they did not want to try to operate the list because of the problems so they sent the PFD ladder up to help these guys. Thank GOD they are alive and well. This is a mechanical failure that could have been really bad but turned out well. These guys got to go home at night with a few injuries and a story. Very special thanks go out to the Kingston Fire Department!

Both workers had all the safety gear on and were wearing it properly! They are alive to tell us that today. The workers were treated. PFD and KFD kept the lift open until OSHA arrived to investigate. Then they cleared the scene.

The lift was a Genie Z-135/70. About a year ago, June 2013, in Buckinghamshire, UK, there was another accident on this type of lift that ended in death. The owner of those boom, Kimberly Access grounded the fleet and after investigation they devised a new safety procedure before putting the fleet back to work. UK’s Health and Safety and Kimberly Access conducted a full investigation to come to this conclusion.

Story 1: After I left my one company they had to raise some large dishes on a tower in upstate NY. Well the plan was to raise the dish and there were still crates of hardware all over the site. The dish was not directly under the tower. To save time they thought they would use the winch to move it and just guide it in. Well, when they raised the dish, it kicked, and pushed one guy towards the hardware crate where his leg, just above the ankle, got pinned between the crate and the dish, guess what happened, his leg snapped. It went from straight to a 90 degrees in seconds and was pinned until the rest of the people could get over there to free him. It happened so fast that some people were in shock. It pays to plan and have a clean site. He was laid up for a very long time. Lesson learned: clean site, plan the lift, tag the load, prepare the people, make sure the winch guy is on the same page as the crew.

Story 2: We were changing out a TV stack from a 90′ analog stack to a 65′ digital. When the new stack came up 1 of the crew members forgot to stay at the tower top to help land it and instead went up to the rooster head of the gin pole. When the guy tried landing it alone he got the first spud perfect but crossed holes on the second. We came down with all the weight resting on the spud. When we tried to take the weight back up, the stack jumped 4′ up, then came crashing back down into the tower top. We pinned it, but bent our gin pole pretty good. Could have been a bad day if it snapped. Lesson learned: plan where each person should be at the time of the lift, stick to the plan unless there is a good reason not to.

Thank you all for the Near miss stories and keep them coming!

Talk to me! Email me at wade4wireless@gmail.com or message me on Facebook or leave the information below. Or call and leave a message at my Google voice mail at 510-516-4283.

Do you love the Hubble Foundation because they need you now more than ever! 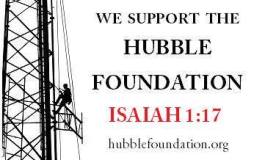 Here is where I ask for support.

My Books on Kindle:

My PDF books so you can buy with PayPal:

My PDF books so you can pay with Credit Card:

By the way, if you read this far, I am planning to put out a new program training the tower workers on the paperwork and processes needed in this industry.